Guinness beef stew has a pungent, one of a kind, nothing like it, flavour that is unmistakably Guinness! It is an extremely hearty, warm, and perfect for the cold weather stew! As a bonus, your house will smell DIVINE.

This stew is best enjoyed cuddled up on the couch with a thick cozy blanket, fireplace crackling, and watching the winter snow fall. Ahh, I just feel cozy writing this!

This post is NOT sponsored in anyway. I just truly love the product and I needed to share this recipe with you all!

Guinness beer is a dark roasty beer, that has strong notes of coffee, and a malty hoppiness. It is definitely an acquired taste, but by using it in this stew it mellows the strong taste of the beer and the delicious flavour infuses the vegetables and meat.

This beef stew has a heavy dark silky smooth taste, and this is in direct result of using Guinness!

I do not recommend substituting Guinness for any other type of beer. If you absolutely can not get Guinness, then look for an extremely dark heavy beer to use instead.

Won’t my stew be boozy?

No! Well initially, yes, but the alcohol cooks off, leaving behind it’s strong musky flavour that is so perfect for a dish like this!

Using the guinness to deglaze the pot and let it sit for 10 minutes to infuse the vegetables with the Guinness’ signature taste.

First things first, you are going to need a large heavy bottomed pot.

This is the one that I recommend. A pot like this will last for YEARS to come and will likely become one of your favorites too! I love it and believe it or not, it is my most used pot that I have in my kitchen! (perfect to add to that upcoming Christmas list ?)

This is an important step. By browning the beef first, you will leave behind all of its yummy drippings in the pot and those will get reincorporated into the finished product, giving the stew much more flavour. It will also ensure that the beef cubes will stay soft and juicy.

Next, you are going to saute the vegetables with the garlic and beef drippings and then use the Guinness beer to deglaze the pot. Let the vegetables boil with the beer for 10 minutes to infuse the veggies with the yummy guinness flavour.

After the vegetables have had a chance to soften and simmer with the beer, pile everything else into the pot, stir it up and get started on the most important part, the roux!

The roux will thicken the mixture into a stew.

What is a Roux?

A roux is a thickening agent made from a melted fat (butter) and combined with a thickener (flour) to create a paste that thickens anything from soups, stews, gravies, or sauces. If you just tried to dump in raw flour it would turn all clumpy and would not incorporate into the mixture at all.

Roux’ are used in various types of cooking and are arguably one of the most helpful cooking techniques you can learn.

After you have your roux made, add it into the stew. Stir it up until it is good and combined. Add the browned beef back into the pot, cover the stew and let it bubble away for about 45 minutes.

After the stew is done cooking, serve it up in large bowls (preferably the kind you can cuddle up with) and enjoy!

We put a lot of work into our recipes, we would love to know if you tried this recipe and how it turned out for you!

If you have any questions about this recipe, I would be happy to answer them in the comments down below! To get a hold of us, you can shoot us an email or leave a comment down below! We can also be found on Instagram, Facebook, Twitter, or Pinterest. 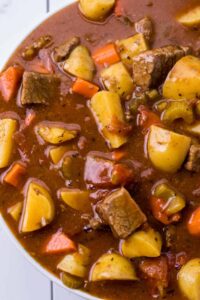 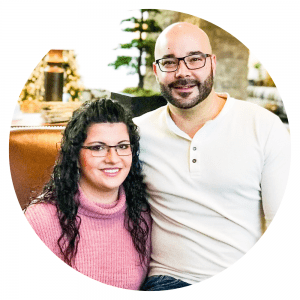 Hi There! I am Jessica, the writer, photographer, recipe developer, and all things technical behind Whipped It Up. Next to me is my sweet fiancé Eddie, he is the professional videographer & musician. He also helps out with some of our social media, and of course the most important part- the professional taste tester! Join us as we create delicious recipes and have a blast in our kitchen! 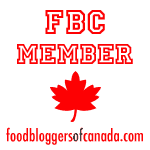